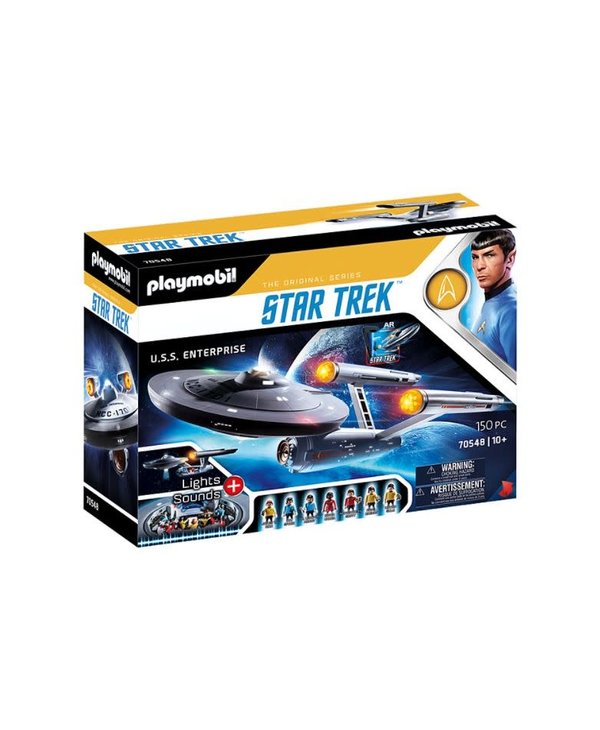 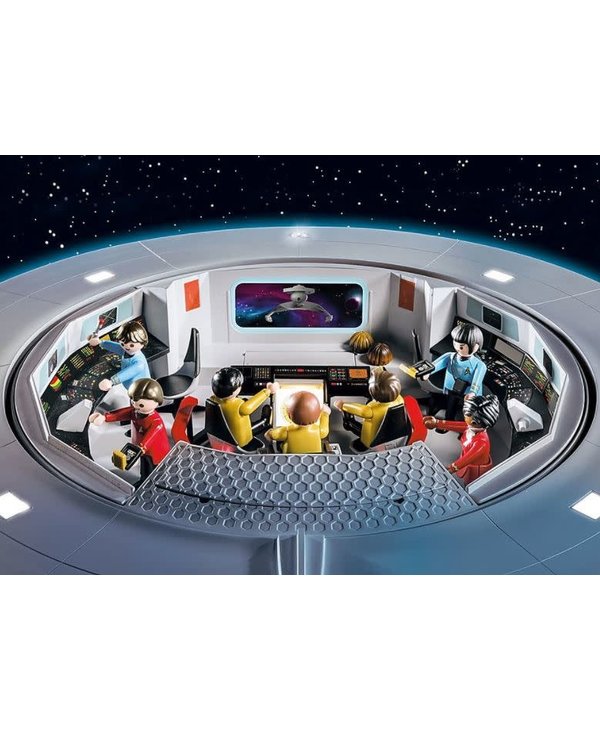 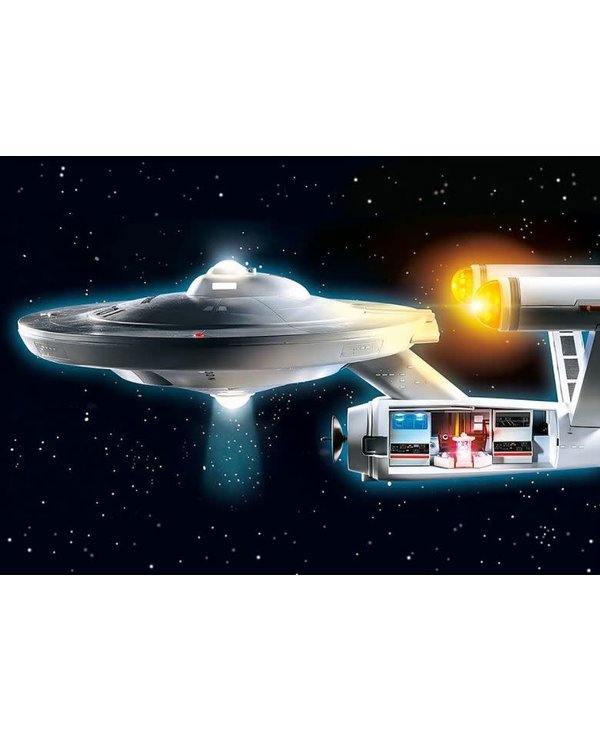 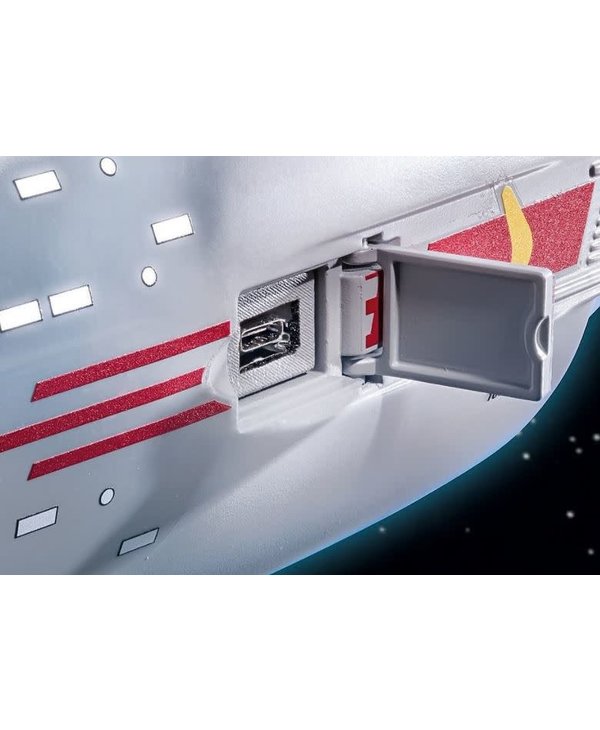 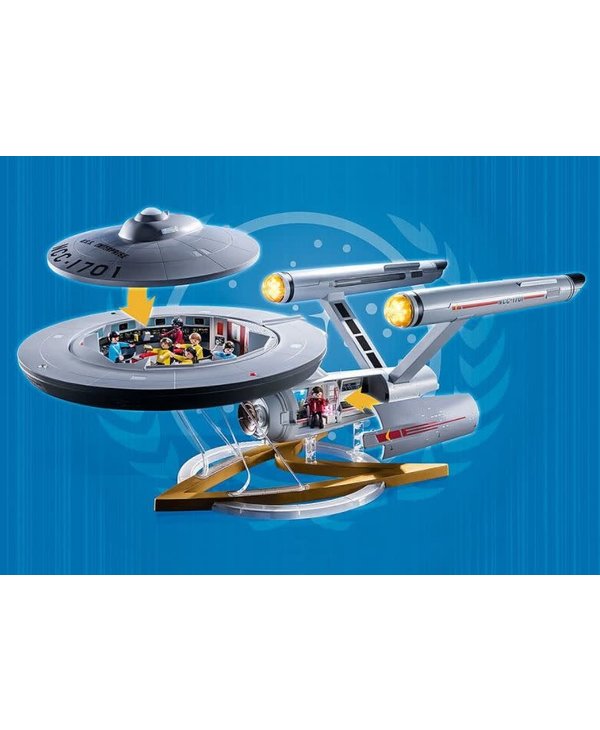 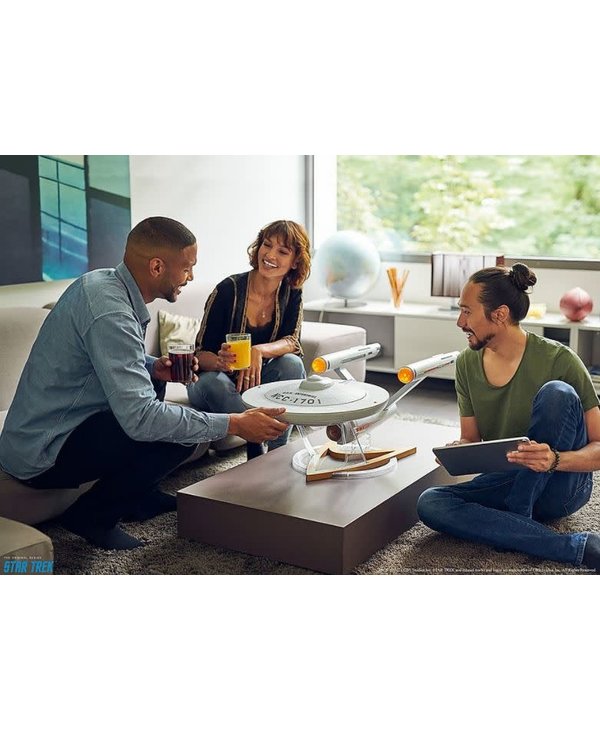 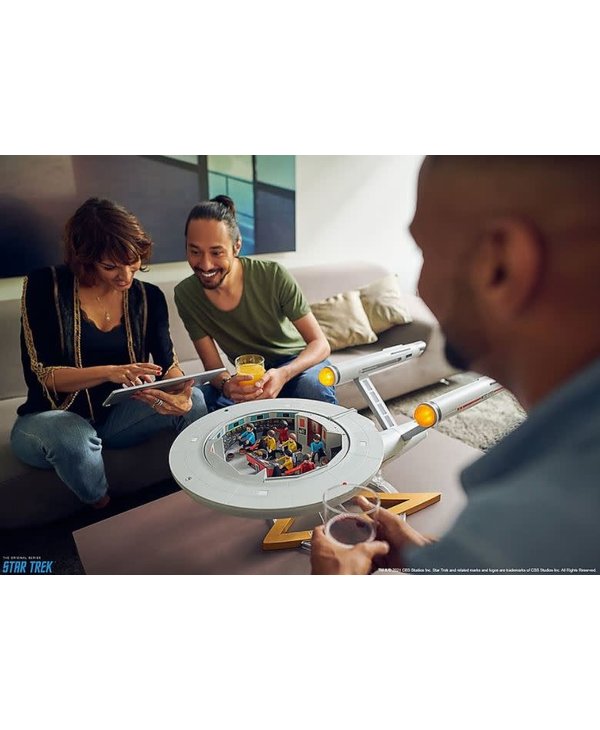 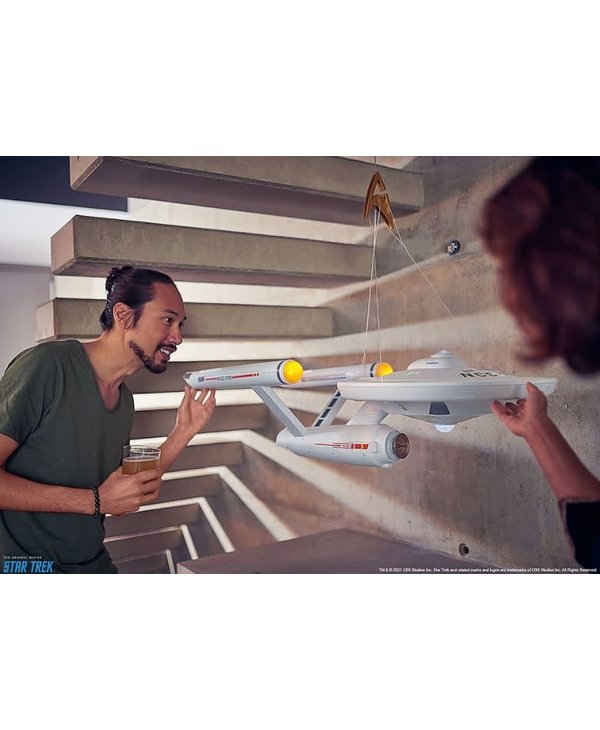 Beam us up, Scotty! Discover the impressive U.S.S. Enterprise NCC-1701 in a whole new light with the interactive Star Trek AR app from Playmobil! Explore the legendary starship, with its iconic bridge and engineering. Interact with her famous crew, featuring Captain Kirk, Spock, Uhura, McCoy, Sulu, Scotty and Chekov. Have fun recreating iconic scenes from the original series show, or set off on new adventures. With a removable roof, the entire bridge and crew are playable! Equipped with lighting effects and original sounds and dialogue from the show, you too can join the adventure of the Enterprise’s historic five-year mission. Dimensions: 100 x 48 x 34 cm (LxDxH)

Who doesn't know the legendary Starship Enterprise? Space, the final frontier - in the 23rd century, Captain James T. Kirk and his crew embark on their mission to foreign galaxies. For five years, the Enterprise is on its way, many light years away from Earth, to explore strange new worlds, to seek out new life and new civilizations, to boldly go where no one has gone. Now the legendary starship U.S.S. Enterprise NCC-1701 is available in the PLAYMOBIL version as an exclusive collector's item. Of course, including the famous crew with Captain Kirk, Chekov, Dr. McCoy, Scotty, Sulu, Uhura and Spock in Starfleet uniform. The PLAYMOBIL Enterprise has a bridge with rotating chair for Captain Kirk, workstations for all crew members, cell phone holder and storage compartment for phasers, communicator and other equipment. In the hull is the engine room with two stand-up workstations. To activate the light and sound electronics, the dilithium core must be inserted into the container and placed in the engine room. Power can be supplied via batteries or USB connection. When switched on, Captain Kirk personally announces greetings. The buttons on the center console on the bridge can be used to control various light and sound effects such as the warp drive, torpedo or alarm sounds. The set includes Captain Kirk, Spock, Uhura, Dr. McCoy, Sulu, Scotty, Chekov and many more accessories as well as a display cradle and wire to suspend Enterprise from the ceiling.

Discover the Special Features of the U.S.S. Enterprise NCC-1701: With original sounds and dialogue from the series. With display cradle for the cell phone to watch movies. For activating the complete light and sound electronics, the dilithium core must be inserted into the removed container and then pushed into the designated position in the engine room. Thus a failure of the „warp core“ can be simulated. If the core is removed, an alarm sounds. Pressing each of the three buttons on the center console triggers a sound and light sequence: Blue button: Warp drive Red button: Alert Black button: Torpedo With USB-C port as alternative power supply. Can be placed on a stand or hung up using an included hanging device.

C$19.99
By using our website, you agree to the use of cookies. These cookies help us understand how customers arrive at and use our site and help us make improvements. Hide this message More on cookies »